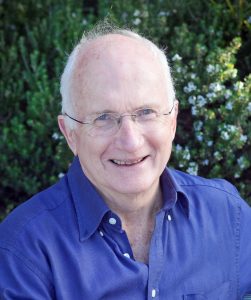 Dr John Irvine has been one of Australia’s most heard, seen and read child psychologists. He had his own one teacher school at the age of 18, taught in NSW schools for many years before becoming a child psychologist and was awarded the Shell Prize for Arts and the University medal during his studies at the University of New England. Dr John initiated preschool training in Toowoomba at the University of Southern Queensland where he also set up the state’s first and most comprehensive family day care and family support scheme and has a community house dedicated to his name for services rendered to families in the region.

Dr John Irvine founded the READ psychology clinic in Gosford in 1981 with his brother, Warwick; this clinic is now one of the largest and most comprehensive psychology clinics in NSW. Dr John also worked as a consultant psychologist for Central Coast Grammar School for 21 years. Dr John has written several books, including “Who’d be a Parent”, “A Handbook for Happy Families” (with four accompanying DVDs) and “Thriving at School”. In 2015 he released “Helping Young Worriers Beat the Worry Bug”. This is a parent handbook for helping their child deal with anxiety and worry and has some wonderful tips and games. 2016 marked the release of “Helping Young Children Handle Frustration and Anger”- another parent handbook in Andi Green’s WorryWoo series aimed at helping identify and manage children’s emotional development.

Dr John has been a regular on many national TV shows, has had a radio segment “Coping with kids” that was aired across Australia and is a much sought after speaker around the nation. He is proud to be patron of Family Day Care, Home Start, NAPCAN, Kidsafe and ambassador for Playgroups.

In 2010 Dr John became involved with Educational Experience and used his PhD research to categorise educational toys under his SPICE rating. The SPICE concept is a system that assesses and rates the quality and benefits of a play item, allowing parents and carers to make an educated purchase. The ratings under the acronym SPICE generally accord with important educational dimensions in child development and multiple intelligence. It was through this exercise that Dr John became familiar with the Worrywoo series and saw the need, both for parent guide books to accompany the series, and also for the extension of their use into schools and early childhood settings in 2019.

Workshop Topic
Caring for the Carer: How to look after yourself when looking after others